Completion of the WING project

Implementation of an automated manufacturing line for textile composite preforms

The WING project initiated in 2017 by IRT Jules Verne with AIRBUS, Fives Machining and Loiretech has just been completed. This emblematic project of the Institute aims to evaluate the capacity of textile technologies to meet the high production rates of the aeronautical industry for the manufacture of large parts with complex geometries.

Designed, developed and manufactured by the WING project team, the MADRAS industrial line was inaugurated in February 2020 at the IRT Jules Verne near Nantes, France. With a length of 18 metres and made up of three robotic units, this operational demonstrator has made it possible to develop a new process for processing “high-speed” textile composite materials. The solution invented by the team is 4 times faster than existing technologies, with reduced investment and consumable costs, and with a lower impact on the environment. The challenge is to produce large parts with complex geometries at a cost compatible with the economic constraints of the aeronautics industry, while aiming for a production rate of 60 aircraft per month. The innovations resulting from the WING project have led to the filing of two patents. 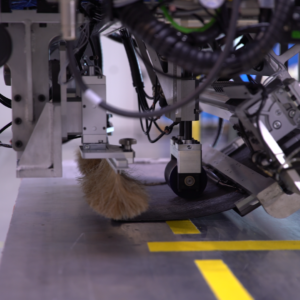 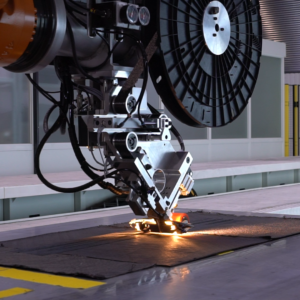 A realistic innovation for a future factory

Marie Weiss, WING Project Manager at IRT Jules Verne, explains: “What makes our work trustworthy is the “industrial production vision” of what the MADRAS concept would look like tomorrow in an AIRBUS plant. We worked for more than four years on tests under industrial conditions, based on precise costings, using a design-to-cost approach. In short, we invented from scratch a low-cost, high-volume production solution that could be transfered to a factory tomorrow”.

The final deliverables of the project include

Results in line with an eco-responsible industry

In addition to increasing production rates and reducing costs, the high-speed textile composites process developed as part of the WING project limits the rate of material waste and scrap and will ultimately help in reducing the environmental footprint of these industries. Indeed, the team has succeeded in optimising the architecture of the preforms to achieve a minimum scrap rate of 5%.

In addition, the IRT Jules Verne has recently launched two new projects in the field of renewable marine energy: CARBO4POWER, a European project funded under the H2020 programme, and ZEBRA, a large-scale project on the recyclability of wind turbine blades, in which the IRT Jules Verne teams will work on design-for-manufacturing. To do this, the Institute will capitalise on its experience developed in the implementation of the MADRAS manufacturing line by transferring aeronautical concepts to the tidal turbine and offshore wind turbine markets.

Other aeronautical projects are already in preparation to imagine the follow-up to WING, and there is no doubt that they will be numerous, given the potential of the results delivered in this project.